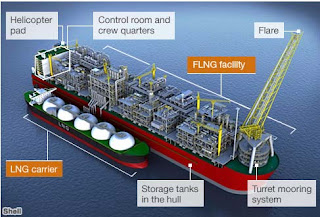 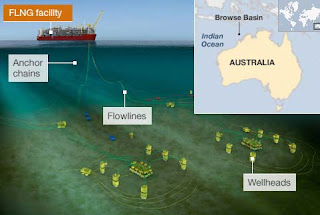 
Shell has unveiled plans to build the world's first floating liquefied natural gas (FLNG) platform. The 600,000-tonne behemoth - the world's biggest "ship" - will be sited off the coast of Australia. But how will it work?
Deep beneath the world's oceans are huge reservoirs of natural gas. Some are hundreds or thousands of miles from land, or from the nearest pipeline.
Tapping into these "stranded gas" resources has been impossible - until now.

At Samsung Heavy Industries' shipyard on Geoje Island in South Korea, work is about to start on a "ship" that, when finished and fully loaded, will weigh 600,000 tonnes.
That is six times as much as the biggest US aircraft carrier.
By 2017 the vessel should be anchored off the north coast of Australia, where it will be used to harvest natural gas from Shell's Prelude field.
Once the gas is on board, it will be cooled it until it liquefies, and stored in vast tanks at -161C.
Every six or seven days a huge tanker will dock beside the platform and load up enough fuel to heat a city the size of London for a week.
The tankers will then sail to Japan, China, Korea or Thailand to offload their cargo.
"The traditional way of producing gas offshore was through pipelines. You brought gas up to a platform and piped it to the 'beach'. That is the way it's done in the North Sea," said Scotsman Neil Gilmour, Shell's general manager for FLNG.
'Cyclone alley'

But the Prelude gas field is 200km (124 miles) from Western Australia's Kimberley Coast and there are no pipelines there to be used.
Johan Hedstrom, an energy analyst in Australia with Southern Cross Equities, told the BBC: "The FLNG concept is an elegant solution because you don't need so much fixed infrastructure.

"You don't need the pipeline or the onshore refinery and when you run out of gas you can just pull up stumps and go to the next field."
Mr Gilmour said Shell had to overcome a "raft of technical challenges", ensuring for example that the vast amount of equipment on board would work in choppy seas.
The Prelude field is in the middle of what is known as "cyclone alley", an area prone to extremely stormy weather.
But Mr Gilmour said the vessel had been built to withstand category-five cyclones and even a "one-in-10,000-years' storm" producing 300km/h (185mph) gusts and 20m-high (65ft) waves.
The double-hulled vessel is designed to last 50 years.
When the Prelude field is exhausted, in 25 years' time, it will be completely refurbished and packed off to start work on another field off the coast of Australia, Angola, Venezuela or wherever.
Mr Hedstrom said: "FLNG is a neat way of going forward. The way that energy prices are going it does look like a good industry to be in and I think they could make a lot of money out of it."
The price of LNG has risen markedly as demand has increased.
LNG currently sells for $14 per one million British thermal units in Japan, where the price was boosted by the tsunami, which cut the production of nuclear power.
The project, estimated to cost between $8bn (£5bn) and $15bn (£9.5bn), could provide 3.6 million tonnes of gas a year.
Flaring off

"Shell are positioning themselves in an emerging market, not just in China - where gas usage has increased by 20% - but in India, which is also increasing its demand," he said.
The project is expected to generate 12 billion Australian dollars (£8bn) in tax revenues for the Australian federal government and could benefit their trade balance by 18 billion Australian dollars over the life of Prelude.
Australia's Minister for Resources and Energy has welcomed the Prelude project, drawing attention to the reduced environmental footprint as compared with a land-based scheme.
But there has been opposition from environmentalists. Martin Pritchard from Environs Kimberley says he is concerned about the potential for "oil leaks and spills". 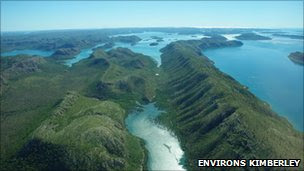 The Prelude field is 200km from the spectacularly beautiful Kimberley Coast
WWF Western Australia, meanwhile, argues that the underwater wellheads and pipelines will harm the tropical marine environment, and estimates the project will emit more than two million tonnes of greenhouse gases per year.
The gas raised from the seabed is purified during the process of liquefaction, and waste products will be flared off. This week the Australian government said it would tax carbon emissions from major polluters at A$23 (£15) per tonne.
But Mr Gilmour says the Prelude project could be the first of several. Shell has already identified the Sunrise gas field in the Timor Sea as having potential for FLNG.
The ship, whose first section will be laid in 2012, has no name. Shell normally refers to it merely as a "facility".
"There are only four or five dry docks globally which could have built this facility and there are certainly no yards in the UK large enough," says Mr Gilmour.
He has been to Geoje Island and, speaking in a broad Ayrshire accent, he said of Samsung's yard: "It's an extraordinary place.
"It's just a phenomenal yard. Samsung is very hi-tech, world class. There are going to be some very spectacular images coming out of there during the building process."

More on This Story