A Huge Energy Opportunity for the Next 25 Years

Watch stocks you care about

The single, easiest way to keep track of all the stocks that matter...

Your own personalized stock watchlist!

It's a 100% FREE Motley Fool service...
Click Here Now
Natural gas production has been taking off across North America, requiring new pipelines to move that gas from where it's produced to where it's consumed. A recent study from an industry trade group has concluded that spending on pipelines must double over the next 25 years. Read along, and I'll explain where the money will be spent, why, and how you can profit.
NatGas!In the past few years, new technologies and cheaper costs allowed producers to access gas trapped in parts of the U.S. previously considered unreachable. As more companies have tapped these unconventional plays, U.S. natural gas production has risen roughly 25% over the past five years, to 78 billion cubic feet per day, or Bcfd for short. Experts expect production to keep rising over the next 25 years, to 113 Bcfd by 2035.
All this new gas needs a lot of new pipelines. According to a new study by the Interstate Natural Gas Association of America (INGAA) Foundation over the past 10 years, companies spent an average of $4.6 billion per year to build 14,600 miles of expansion pipeline. For the U.S. and Canada to maintain efficient, well-functioning natural gas markets, INGAA has concluded that we'll need to spend an average of $8.3 billion per year between now and 2035. That doesn't include the $1.3 billion a year of pipeline infrastructure that oil production will likely need. Combine these two, and at $9.6 billion a year on infrastructure, that's more than a 100% increase in spending for the next 25 years.
INGAA projects that we'll need 43 Bcfd of expansion mainline capacity from 2010 to 2035. Besides major regional lines, smaller pipeline laterals will need to connect new power plants, storage fields, and processing facilities to the natural gas transmission network, with expected investments of $5.7 billion per year. New gathering system pipelines will also be required to connect new producing wells to processing facilities and pipelines, with an expected investment of $2.6 billion per year.
Remember the Gold RushNow, some would have you think that you can best play this opportunity by investing in major pipeline operators Kinder Morgan Partners (NYSE: KMP  ) or Energy Transfer Partners(NYSE: ETP  ) . I think there's a better way. Remember the California Gold Rush: The miners didn't get rich, but the people who sold the picks and shovels sure did. Who'll make the most money during this pipeline rush? Enter the folks who make pipes -- or, if you want to be all formal, "oil country tubular goods," or OCTG.
Put that in your pipeThere are many pipe makers to choose from, but a few stand out.
U.S. Steel (NYSE: X  ) is the largest player in the North American OCTG market, thanks in part to its 2007 acquisition of Lone Star Technologies, the leading producer of welded OCTG in North America. But oil and gas pipes only represent about 15% of U.S. Steel's business. There are better ways to take advantage of the increase in pipelines.
Ameron (NYSE: AMN  ) specializes in molded fiberglass pipe and fittings. The oil and gas processing industry uses these products as an alternative to metal pipes, since metal pipes corrode over time. While Ameron won't be making the massive pipes transporting natural gas, it will have a hand in the refineries and oil platforms needed to get that gas to consumers. Ameron's fiberglass pipes are also used in service stations, and the company would benefit from a shift toward more natural gas vehicles and service stations. The pipe group makes up 44% of Ameron's business, with a water transmission group making up 43%, and a concrete and aggregates group making up the last 13%. (Editor’s Note: On Tuesday, after this article was published, National Oilwell Varco announced it was acquiring Ameron for $85 a share, a 28% premium to Ameron’s closing price on July 1.)
That said, I'm most interested in Tenaris (NYSE: TS  ) , a global producer of OCTG products based in Luxembourg. It's well-positioned to capitalize on the pipeline boom, since tubular products make up 87% of Tenaris' business. A huge chunk of that comes from North America: 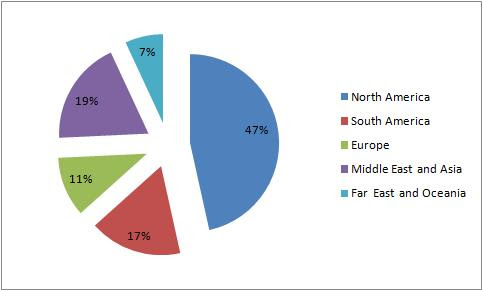 Tenaris is not particularly cheap. Its $1.2 billion in earnings over the past 12 months give it aP/E ratio of 22, in line with peer OAO TMK. (U.S. Steel was not profitable this past year.) However, Tenaris' direct exposure to the OCTG business should allow its investors to best cash in on the pipeline boom.
Posted by Editorial at 17:31