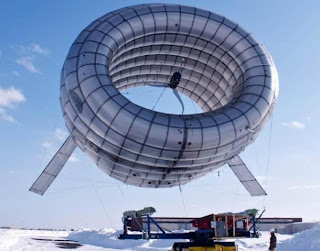 A prototype of Altaeros Energy's high-altitude wind turbine in Maine.
(Credit: Altaeros Energy)
Startup Altaeros Energy is going up for more energy.
The company yesterday said it has successfully tested a prototype of its
airborne wind turbine, which is a traditional small wind turbine enclosed
in an inflatable shell. The Boston-based company is seeking to partner
with others to build and test a commercial-scale turbine.
Altaeros Energy is one of a few companies developing systems to
capture the stronger and steadier winds at high altitudes.
Others include Makani Power, Joby Energy, and Windlift.
For its prototype test in Maine, Altaeros Energy placed a Southwest
Skystream turbine, which is normally placed on a pole, inside a helium-filled shell.
The entire machine is tethered by a cable which transmits electricity
and was lifted to 350 feet.
At that height, the Skystream turbine produced more than twice the
power than a typical tower-mounted one, according to Altaeros Energy.
The prototype test also automatically hoisted and lowered the
airborne turbine, which was attached to a towable trailer.
"Modern inflatable materials can lift wind turbines into more
powerful winds almost everywhere -- with a platform that is cost
competitive and easy to setup from a shipping container,"
CEO Ben Glass said in a statement. The technology is designed
to capture wind over 1,000 feet, he added.
Altaeros Energy is going after a very specific market with its first-generation
product of locations that rely on diesel generators.
That could include military bases or remote off-grid industrial sites or villages.
Longer term, it hopes to deploy its inflatable turbines offshore.
The shell itself was made by a sail-making company and the l
auncher was converted from industrial blimps called aerostats used
for heavy communications and radar equipment.