Virtual pipeline that ships LNG around the world is growing in importance – and reducing the UK's reliance on Russia. But it can't insulate the gas supply from disruption 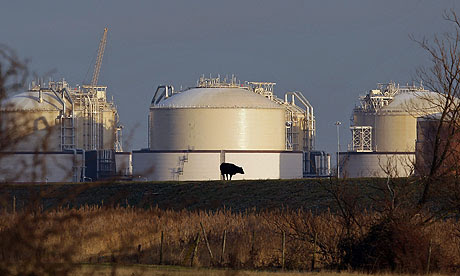 National Grid's liquefied natural gas terminal on the Isle of Grain. On one of the coldest days of the month, a record quarter of all gas consumed in the UK came from LNG. Photograph: Peter Macdiarmid/Getty Images
On a freezing morning, Simon Fairman, manager of National Grid's Isle of Grain liquified natural gas terminal, greets a blue-faced engineer in a control room. The engineer had just come inside after a morning checking nuts and bolts on the windswept new jetty which opened for business at the start of this month. Protruding some 300 metres into the murky River Medway, the jetty can accommodate tankers the size of aircraft carriers to offload their precious cargo of supercooled liquid gas.
The timely expansion – which coincided with the coldest weather for decades – means the £1bn liquified natural gas (LNG) terminal, the world's largest outside Japan and Korea, can now supply up to a fifth of the UK's average annual gas demand.
However, a tanker which had been expected to dock that day was not now due until the following week, giving engineers the opportunity to carry out maintenance. It is impossible to know precisely when LNG tankers – sailing mostly from Algeria, Qatar and Norway – will arrive. A maximum of five can dock there each week. Gas producers such as BP, Algeria's Sonatrach and Gaz de France pay National Grid to book berthing slots at the terminal but do not have to use them.
"They will pick and choose – they can change their mind up to the last moment," Fairman says. "If there is a demand for gas in Spain, they will take the cargo there because there is a better price rather than bring it to the UK, for example."
Last year one tanker from Algeria on its seven-day voyage to the Isle of Grain had got as far as the Straits of Dover when the ship's master was called by Sonatrach, owner of the cargo.
"There were some problems in Turkey and a need for LNG there," Fairman recalls. "They were saying: 'We may need you to divert, we may need you to turn round and go full speed to Turkey.'"
LNG is gas compressed into a liquid for shipping and then reconverted into gas after it reaches its destination. Fairman calls the growing number of LNG tankers and terminals such as the Isle of Grain around the world a virtual global pipeline.
The UK has three major terminals which between them are able to supply almost half of the country's average annual gas demand. Each of the largest tankers carries enough gas to supply about a third of the UK's average daily winter demand.

The International Energy Agency this year pointed to an unexpected global "gas glut" which it forecasts will last for a decade, the result of new ways of producing "unconventional gas" from shale or coal seams. This glut means that oil companies such as Shell will soon be producing more gas than oil for the first time.
Not relying on physical pipelines, LNG allows producers to reach new markets such as the UK. On one of the coldest days of the month – December 19 – a record quarter of all the gas consumed in the UK came from LNG. Ships flocked to UK terminals to meet demand – and to benefit from the high prices energy companies such as British Gas were prepared to pay to keep their customers supplied.
National Grid estimates that as supplies from the North Sea run out, the UK will be forced to import 70% of its gas by 2020, with two thirds of this coming from LNG. The gas glut and expansion of terminals such as the Isle of Grain have also eased concerns over security of supply as the country is less heavily reliant on imports shipped by pipeline from Europe and Russia.
However, the growth in LNG does not mean the UK will be entirely insulated from winter gas supply rows involving Russia and its European neighbours. In fact, the Guardian's visit to the Isle of Grain coincided with one by Russian energy group Gazprom, with the company talking to National Grid about booking new berthing slots.
"If you are a producer of LNG you will always be looking for new markets," Fairman says. "In the situation with Gazprom – they clearly would like to develop their capacity for LNG. From our point of view, there is an opportunity of having a conversation which prospectively could or could not lead to something."

Nick Campbell, from energy consultancy Inenco, argues that relying more on LNG opens up the UK to the vagaries – and volatility – of global gas demand. He cites the example of an LNG tanker from Nigeria bound for the Dragon LNG terminal at Milford Haven in Wales in August, which was diverted at the last minute to Brazil. Lower-than-expected rainfall meant that Brazil's hydro plants were generating less electricity, requiring its gas plants to increase production.
The UK can import up to about 75% of its average winter demand via pipelines from Norway and the Continent, but this gas will flow elsewhere in Europe if the price is higher there.
"With pipelines we are competing against Europe for gas. With LNG, we are competing in a global market," Campbell says.
Whether LNG cargoes arrive in the UK depends on how much suppliers are willing to pay. "When people say we are running out of gas we are not, but the price may have to increase to incentivise shippers," Campbell says. "Gas producers are not the Salvation Army. They are not going to do anything for free."
But equally, he estimates that gas bought on the spot market would cost a quarter more had the UK's LNG capacity not nearly tripled in the last two years.
Fairman insists the destination of most LNG tankers is scheduled months in advance: "This not 'Where am I going to put it today?'" He says they should not be viewed any differently to oil tankers. "We don't worry about where oil tankers are going with our petrol.
Posted by Editorial at 09:18