Aug. 5 (Bloomberg) -- Blackstone Group LP, the biggest private-equity firm, secured financing for a 1.2 billion-euro ($1.7 billion) wind farm in the German North Sea as the nation abandons nuclear power in favor of renewable energy.
The 288-megawatt Meerwind project southwest of Helgoland will be Germany's largest offshore wind-energy plant, Blackstone Managing Director Sean Klimczak said today in a briefing in Berlin. The New York-based company also bought a license for a second offshore wind project expected to cost 1.3 billion euros and said it may buy more permits.
The 822 million-euro funding was granted by a group of seven commercial banks and two state-owned lenders, according to Peter Giller, board member at WindMW GmbH, the German developer majority-owned by Blackstone-controlled funds that secured the financing.
Germany's government is pushing development of sea-based electricity plants to make up for lost capacity as the country plans to shut down its atomic reactors by 2022, which last year comprised 23 percent of the nation's installed generation base.
Chancellor Angela Merkel's government has raised subsidies for offshore wind farms as part of a plan to install 10,000 megawatts of sea-based turbines by the end of this decade, up from about 210 megawatts now.
Germany's largest offshore wind farm that's already operating is the 60-megawatt Alpha Ventus project, according to Bloomberg New Energy Finance.
For the Meerwind project, the banks include Germany's Commerzbank AG, Banco Santander SA of Spain, and Lloyds Banking Group Plc together with Denmark's export credit agency EKF and German development bank KfW, Giller said. KfW and EKF are each providing 245 million euros.
Construction will start Sept. 1, 2012, and is due to be completed in 2013, Giller said.

Why can't we grow new energy? Juan Enriquez on TED.com


Biologist and futurist Juan Enriquez talks about the potential of bioenergy. Our current energy sources — coal, oil, gas — are ultimately derived from ancient plants — they’re “concentrated sunlight.” He asks, Can we learn from that process and accelerate it? Can we get to the point where we grow our own energy as efficiently as we grow wheat? (Less than a month after this talk, his company announced a process to do just that.) (Recorded September 2007 in New York City. Duration: 18:16.)

The future of natural gas

Coming soon to a terminal near you

Shale gas should make the world a cleaner, safer place 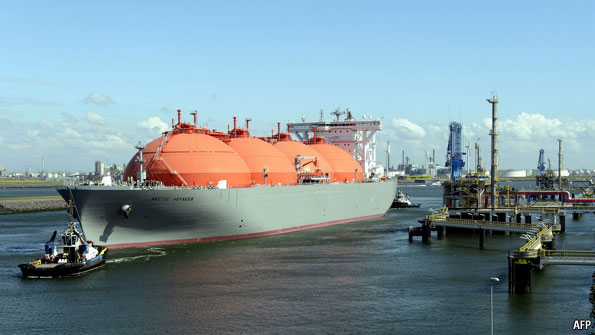 ALONG the coast of China, six vast liquefied natural gas (LNG) terminals are under construction; by the end of 2015 they should have more than doubled the amount of LNG that the country can import. At the other end of the country, gas is flowing in along a new pipeline from Turkmenistan. In between the two, geologists and engineers are looking at all sorts of new wells that might boost the country’s already fast-growing domestic production. China will consume 260 billion cubic metres (260bcm, which is 9.2 trillion cubic feet) of gas a year by 2015, according to the country’s 12th five-year plan, more than tripling 2008’s 81bcm. The roots of this rapid growth, though, do not lie in China’s centralised planning. They are to be found in a piece of deregulation enacted decades ago on the other side of the world: America’s Natural Gas Policy Act of 1978.
America’s deregulation of its natural-gas market encouraged entrepreneurial energy companies to gamble on new technologies allowing them to extract the gas conventional drilling could not reach. Geologists had long known there was gas trapped in the country’s shale beds. Now the incentives for trying new ways of recovering it were greater, not least because, if it could be recovered, it could be got to market through pipelines newly obliged to offer “open access” to all comers.
In this section

Reprints
Decades of development later, the independent companies which embraced horizontal drilling and the use of high-pressure fluids to crack open the otherwise impermeable shales—a process known as “fracking”—have brought about a revolution. Shale now provides 23% of America’s natural gas, up from 4% in 2005. That upheaval in American gas markets has gone on to change the way gas is traded globally. A lot of LNG export capacity created with American markets in mind—global supply increased 58% over the past five years—is looking for new outlets.
To the extent that the shale-gas success is repeated elsewhere, a vital source of energy will become available from an ever more diverse and numerous set of suppliers in increasingly free markets. This means that, unlike the boom in oil in the decades following the second world war, this growth in gas may not hand a powerful political weapon to those countries with the biggest reserves. Shale gas could significantly diminish the political clout that Russia, Venezuela and Iran once saw as part and parcel of their gas revenues.
“The power of the shale-gas revolution has surprised everyone,” says Christof Rühl, chief economist at BP. In 2003 America’s National Petroleum Council estimated that North America (including Canada and Mexico) might have 1.1 trillion cubic metres (tcm) of recoverable shale gas. This year America’s Advanced Resources International reckoned there might be 50 times as much.

The shale-gas bounty is not confined to America. The country’s Energy Information Administration released a report in April that looked at 48 shale-gas basins in 32 countries (see map). It puts recoverable reserves at 190tcm, and that excludes possible finds in the former Soviet Union and the Middle East, where huge reserves of conventional gas will make investment in shale gas unlikely for years to come. In short order estimates of the Earth’s bounty of recoverable gas have expanded by about 40%. Improving extraction technologies and geological inquisitiveness are sure to raise that figure in the years to come.
Nor is shale gas the only new sort of reserve: “tight gas” in sandstones and coal-bed methane (the sort of gas that used to kill canaries down mines) are also promising. Farther in the future, and more speculatively, there’s the gas frozen into hydrates on the planet’s continental shelves, which might offer more than 1,000tcm if a way can be found to exploit it. The cornucopian belief that human ingenuity will always find ways to increase the availability of resources is not a sure bet (see article). With gas, though, the odds look pretty good for decades to come. 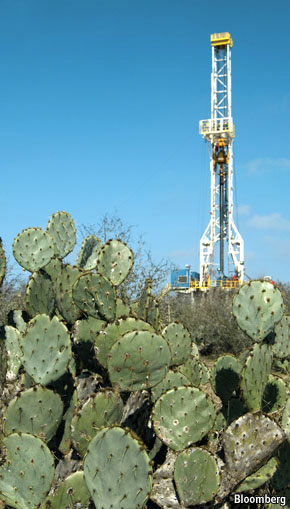 It’s everywhere
Increasingly, it looks as if today’s significant regional price differences will be arbitraged away, and that gas could become as fungible and as widely traded as oil. LNG’s growth (23% by volume in 2010) shows no sign of slowing. European LNG import capacity has more than doubled since 2000; the costs of building an import terminal have plunged. So far this year twice as many LNG vessels have been ordered from the world’s shipyards as in the whole of 2010. Qatar, which along with Iran and Russia holds the world’s most impressive conventional gas reserves, is adding new liquefaction plants. Other countries are also busily constructing export terminals; while Australia leads the way, Indonesia, Papua New Guinea and others are all set to bring more LNG to the world markets. There’s even work on liquefaction plants in America.
One consequence of a global gas market supplied from widely distributed conventional and unconventional sources is that this diversity will reduce the power of big suppliers to set prices and bully buyers. There has been occasional talk of a “gas OPEC”, most audibly when, just before the end of 2008, a dozen or so gas producers met in Moscow under the chairmanship of Russia’s prime minister, Vladimir Putin. Despite the rattling of sabres on pipelines, though, something analogous to OPEC looks near impossible under current conditions. For one thing, utilities mostly have spare capacity and can thus adjust their fuel mix in a way that car drivers confronted with an oil shortage cannot. What is more, managing the supply of gas month by month, as the oil cartel seeks to do, would be near impossible when most gas continues to be supplied on long-term contracts that are difficult to break.
And the new technologies are widening the production base all the time, weakening the strategic importance of conventional reserves and the power of those who hold them. Before shale gas, it was thought that Venezuela might soon become an important gas source for America, and that Iran’s vast gas reserves would motivate potential customers to break the sanctions imposed on it as a result of its nuclear programme. Both things are now less likely; the Baker Institute study suggests that while both countries will grow in importance—it foresees 26% of the world’s LNG coming from Venezuela, Iran and Nigeria by 2040—they will do so much more slowly than they would have in a world of constrained supplies.
The growth of the gas market will not be untroubled. Large projects will be delayed sometimes, leading to periods of tight supply; there may also be overcapacity at times, as there has been recently. America’s shale-gas success—a matter not just of helpful geology and Yankee ingenuity, but also of various legal and regulatory positions such as those of the 1978 act—may prove hard to replicate in some other countries. Environmental worries could stop shale gas dead in places. But although the pace may slow and the road may have bumps, for the moment the revolution looks set to roll on.
Posted by Editorial at 16:36 0 comments